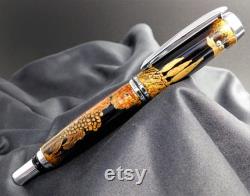 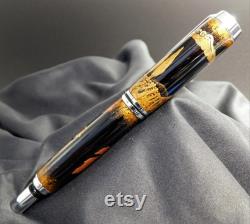 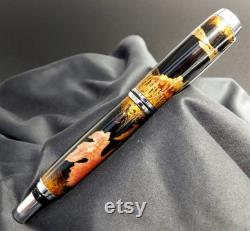 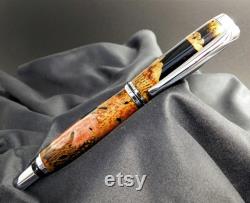 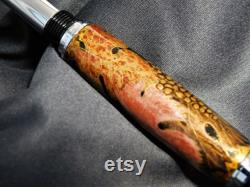 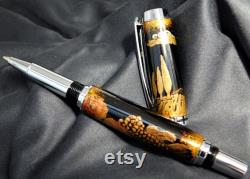 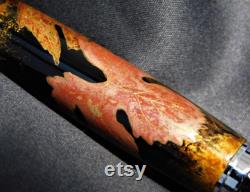 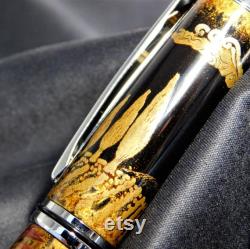 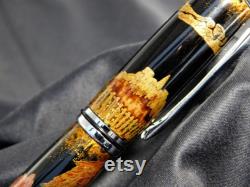 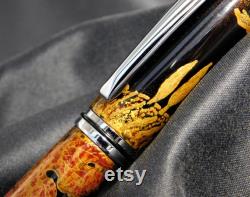 Hand-turned rollerball pen in wood. On the polished wood were applied 15 hands of kuro roiro urushi, original japanese lacquer of deep black color. Each layer of urushi was carefully polished and the base was finished with a colorless layer of kijiro urushi on which 23.75 k gold was distributed in fine powder, later covered with an additional layer of kijomi urushi. To resurrect the gold, the last layer of urushi with magnolia charcoal and water was carefully removed.

Then the final polishing was carried out with kijomi urushi, fine mineral powder and slowly clutched camellia oil with your fingers. Once the base was completed, the design was carried out with various traditional japanese techniques, from chinkin to togidashi maki-e to taka maki-e to represent vine leaves and a bunch of grapes on the garden and on the hood a hilly landscape with cypresses, vineyards, clouds and a town on the hill. Pure silver powders (999/1000), 23.75 k gold, copper were used.

Red shu urushi lacquer and neutral kijomi urushi were also used. The nuances and depth effects were obtained by dusting the metal, covering it with lacquer and removing it more or less deeply with charcoal and water. The complex processing took 2 months. Screw cap screwable on the back. Open length 12 cm, closed length 12.7 cm, hood diameter 1.5 cm, diameter 1.4 cm. It is the finest japanese lacquer, obtained from the refining of the sap of the rhus vernicifera tree. It has been used in the far east in both china and japan since 4,000. It is a completely natural, non-toxic product once dry, extremely hard but at the same time elastic, resistant to acids, alkali, alcohol and high temperatures. Urushi has the property of curing in contact with atmospheric humidity and, in fact, for its optimal hardening and drying special containers, called "furo", are used, with temperatures from 20 to 25 degrees c and humidity between 70 and 90 percent. Because of the complexity of its workmanship and its incredible beauty and versatility, it has always been used in japan to distinguish the pens of the highest construction and artistic quality. "Sprinkled painting", a traditional japanese artistic technique, begun in the 9th century. Which exploits the extraordinary adhesive power of urushi.

Decorative motifs are made by sprinkling gold, silver or platinum powders on the fresh lacquer. With the various overlaps of metallic powders and lacquer layers and various techniques you get different light effects, colors and depth of images. It is a very slow and thoughtful technique that requires great skill and attention as it does not allow errors of any kind. In fact, it requires many steps, drying and sanding but the result translates into a virtually "eternal" and suggestive work for many future generations.