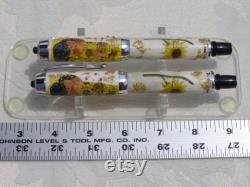 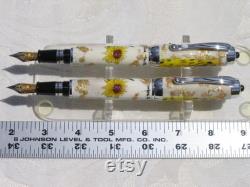 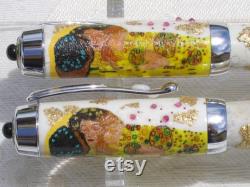 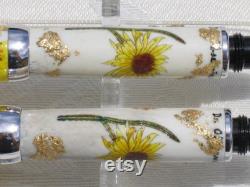 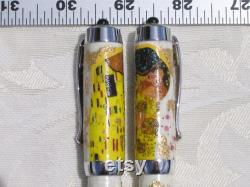 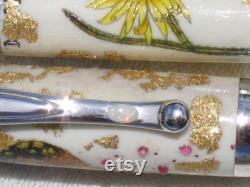 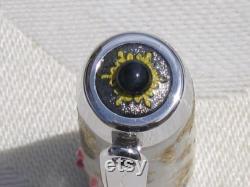 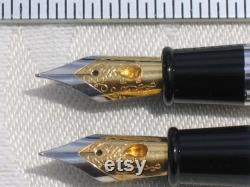 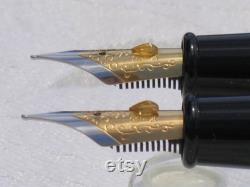 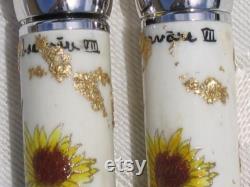 Late night kiss in nouveau series realized through the collaboration with innovative craftsman richard kleinhenz of new york city (antlers carver) and cutting-edged engraver ken nelsen of las vegas (laser crimshaw), and kenneth du (pen designer, painter, poet) of sacramento. The series is limited to 15 fountain pens and features a rendition of gustav klimt's masterpiece "the kiss" with exotic rose of asia, night blooming cereus, on barrel. Handpainted with every pen # and signed.

Golden citrine gemstone on 2 toned gp iridium scrolly nib m. Translucent onyx on top of cap. Inside cap: painted & adorned with 24k gold leafs nest, large irridescent sunstone gem on top (heart shape sunstone). Post, 6 (not including nib). Please note: antlers used in the making of these pens are from shedding deer no deers were harm from the making of these fountain pens.

Queen elizabeth ii of england and prince philip, the duke of edinburgh also own a pair of these pens. Late night kiss in nouveau: an enduring fable that commences from the wintry austrian border and stretches to the remote regions of asia. One takes flight to search for hidden treasures in uncharted lands. Time and time again he failed.

With every new exploration carries greater risk. During the last raid into a forbidden temple, most of his men were killed. Unbeknownst to him, his lover has been waiting all the while. As midnight approaches, she begins to drift away. Is she a figure of his imagination at the foothill or an utter nightmare with her in arms.

My queen of the night. At the edge of adaman sea. I sow the seed of crop.

Sprung from the earth's crust. And there i court you. In cyprus, a garden, ledge of a fountain. Turn into a summer with you. During this descend, many perished.

Like unreal players under a morbid act. With you rosy and clinging. Pale skin of twenty past.

Made fresh from collected perfumes. Only this time you descend. Composite scena is the ism of isms: no schools, styles of art, or periodic movements spanning as well as exemplifying from old masters to modern masters are off limit to composite scena artists.

The composite scena artists aim at producing synergism between the written poetic language and the visual language from painting, sculpture, etc. According to the new oxford dictionary, synergism is defined as the interaction or cooperation of two or more organizations, substances, or other agents to produce a combined effect greater than the sum of their separate effects: the synergy between artist and record company. It sounds moronic, that the collaboration between artist and record company, produces synergism. How can one survived without the other and the music produced from a successful band will reap exponential fame and fortune for both parties.

My desired synergism will result in a work of art that is extensive in interpretation and expansive in relation to the confined compositional physicality of the painted canvas, but without losing the sight of the intended scenario. The followings are mathematical illustrations of the exponential, additive power of composite scena.

1 painting + 1 painting 2 paintings. 1 poem + 1 poem 2 poems. 1 painting + 1 poem 4 paintings + 4 poems. In essence, each schematic painting and its poetic accompaniment, together, will portray a scenario, narrative, or story immeasurable in both simplicity and complexity as pertain to the compositional piece: you will perceive those things not clear or not seen when viewing the painting and poem together while not losing sight of the shore. Styles of art have come and go from fresco and the renaissance, neo-classicism, romanticism, realism, impressionism with its respective branching of symbolism, divisionism, and fauve and german expressionism cubism and off-shoot orphism, futurism, vorticism, rayonnism, suprematism, constructivism, neo-plasticism, dada and surrealism, preceding abstract expressionism.

Art, in a broader sense, builds upon the preceding generation of artists who simultaneously both borrowed and revolted against their predecessors and colleagues. Composite scena neither borrow nor revolt against these milestones, rather this new path strives to embrace the past, the present, and the future. Composite scena serves as a unifying theory to bridge methodologies and enhance understandings while opening new doors to the interpretations of compositional art form: poetry and painting and the endless combinations thereof.

Composite scena as a movement reflects the classical traditions and academia in both literatures and arts; yet it does not neglect nor dismiss the mobility and openness of the 21st century to encompass the forever, mass expansion of the information age and our technologically driven society and their new takes and perceptions on modern art. Composite scena as a theory took over ten years to develop, from early'90s inception and experimentation, into a functional methodology - the compulsory drive for synergism in both the subjective and objective natures of art with the unintended exploration of the artist as the omnipotent composer of defined physical space yet devoid of cognitive boundaries. Many of my earlier synergistic works were done on locations, e. The experimental paintings and sculptures realized during the clinical elective period of medicine. These works were subsequently donated to the hospitals and their institutions in hope of sharing and expanding on a new idea(s): an innovative approach to the perception of art in medicine. Archduke kenneth khanh du, hs, ba psych, md, cert film.